Fred Jamar says, “Like many of you, I have been many things: a boy scout, a college student, a military police lieutenant, a lab analyst, a merchant marine officer, a bank vice president, and a painter. Like most of you, I have well-enjoyed these things, but should I be given the opportunity to start my life over again, I would concentrate all my energy solely in one direction: painting.”

Fred Jamar has brought a new infusion of intellect and energy to Charleston’s art scene. Born in the village of Stembert in Southern Belgium he has been a world traveler through most of his adult life. After graduating with honors from the Belgian Maritime College (he was valedictorian!), and three years at sea, he studied finance. With an MA-equivalent degree, he covered the globe working for J.P. Morgan & Co. He has lived in Brussels, Paris, London, Frankfurt, and New York. There are no continents and very few countries he has not seen.

His recent work has been dominated by Charleston cityscapes – not seen, however, with the traditional eye. The sky is generally very dark, inky “Prussian” blue, and starless. The trees are assembled color masses, balloon-like in appearance, and the buildings are intensely vivid in form and color, an impression heightened by the overhanging darkness. The paintings are bright, but also lonely. The mood is stock-still. Most have no human or animal figures. It is as if Edward Hopper painted an abandoned carnival at 3:00 A.M. They are brilliant.

Fred was originally intended to occupy The Vendue’s artist studio for a few months… in 2021, the Vendue celebrates six years of being inspired by his life and artwork. Fred is also represented locally by Robert Lange Studios at 2 Queen Street. 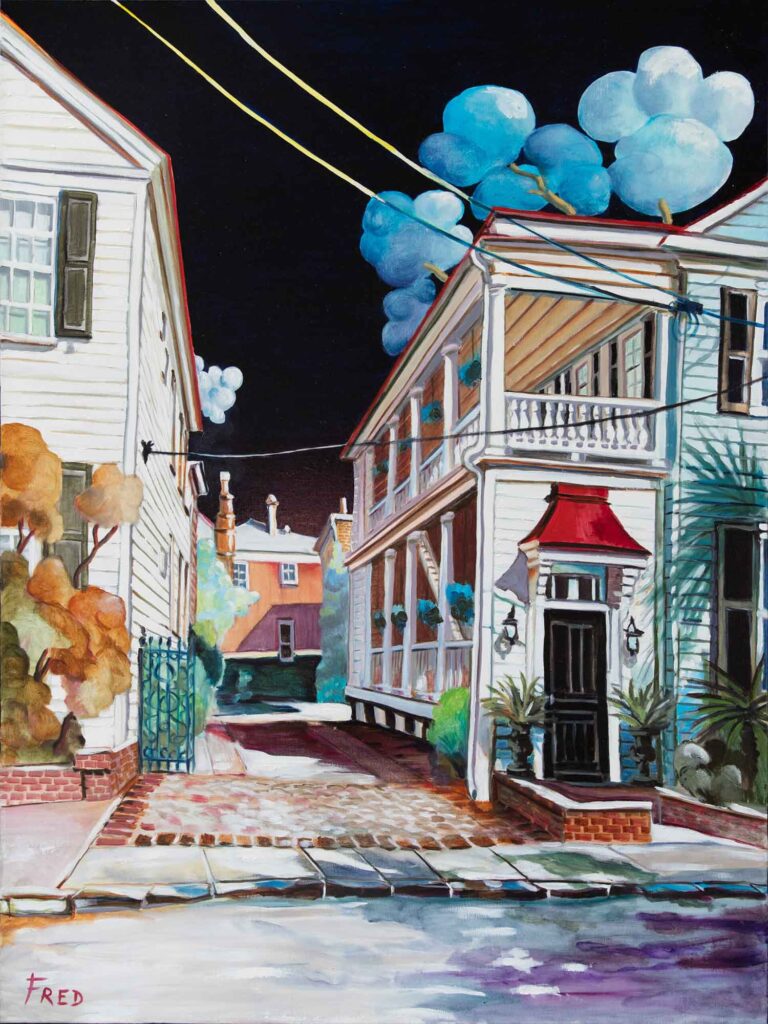 Stay up to date on our art gallery, art related events, and artist in residence.